I have now been following Eat to Live (ETL) for ten weeks!  Looking back on the these past two months, I find it hard to believe that it has been as long as it has.  When I first started, it seemed so daunting, looking ahead to a six-week plan that included a lot of vegetables, fruit, beans, some grains and a bit of nuts and seeds. The list of things I could not have was huge….animal products, including milk, yogurt, ice-cream, cheese and meats, oil, sugar, salt, bad carbohydrates, coffee, processed foods, such as packaged chips, crackers, frozen meals, vegan junk food, gluten free junk food etc.  But now, ten weeks later, the six-week plan has turned into a lifetime plan. After week three, I no longer craved the foods that I could not have but instead started craving kale, salads and beans. I no longer missed going through the middle isles of the grocery store where all the processed food was. Shopping became easier because most of what I now buy is found in the produce department. With time, I found that salads filled me up without making me feel bloated. I also learned to buy foods that easily could be transformed into a smoothie or a cold salad or soup.  I learned that beans didn't only have to be eaten plain with just salsa or in Mexican food, but could be turned into homemade "refried" beans,  black bean brownies, bean and veggie burgers, chickpea flour flatbread hamburger buns, added to smoothies, added to salads and added to soups. Another positive was if I ever craved ice-cream then frozen bananas in the blender turned into a delicious soft serve concoction. I could change the flavor by adding other frozen fruit, unsweetened cocoa or nuts.  The most important thing I have learned is that I have yet to feel deprived even when hanging around people who are eating bacon, cookies or other items that I used to have to have.

Now to the most exciting aspects of this plan….I actually now fit in clothes that I haven't fit in for five years. In the past, even after running and walking 4 miles almost every day or swimming three times a week the weight was not coming off. I almost felt like I was just getting heavier. I tried blaming it on getting older.  I tried to refuse to accept that the food I was eating was the real problem since I was exercising a lot.  So I tried working out harder and more often and it just seemed fruitless.

Finally, I happened upon Eat to Live. I read the whole book and many of the testimonials of people who followed ETL or follow a similar plant-based diet.  In ETL, Dr. Fuhrman asked for a six-week commitment. He boldly said that just "trying" was not going to be good enough.  Those who say they will try have already set themselves up for possible failure. Those who commit 100% have a far smaller failure rate.  So, at the end of June, I weighed myself, I tried on clothes to see if I could button them and I sat in a Body Pod to see how much fat I was actually carrying around.  My fat percentage was higher then I expected and it actually shocked me into a full 100% commitment.

This commitment was well worth it!

If you happen to be in Arizona, come on down to the Arizona Fine Art Expo to visit my studio. Admittance is free if you mention you are there to see me. 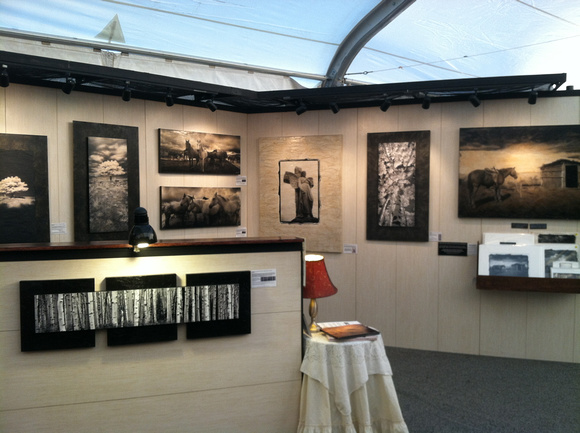 Eric(non-registered)
Catching this now, thanks to the Googles.