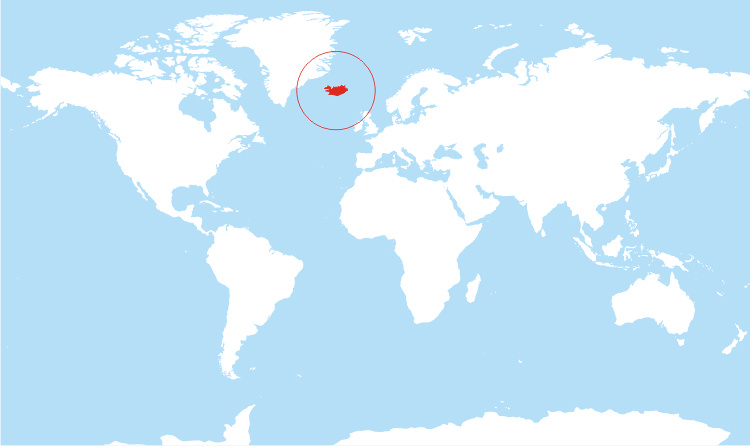 I had the incredible pleasure of being asked to go to Iceland this year with one of my workshop clients, turned friend, Kathy. Iceland had been on my radar for a number of years so when she brought up the idea I was positively responsive!  This was exciting because it was not only Iceland, it was also a one-on-one workshop!

I don't believe there is a bad time to visit Iceland, it was just a matter of what we wanted to focus our attention on. It is very well known for its waterfalls and luckily they flow all year round. With Iceland being just the size of Kentucky,  massive lava fields, mountains and glaciers gobble up a large majority of the island. The winters are very cold and daylight hours are short but we had the Northern Lights and Ice Caves to consider. Summers are best know for the extended daylight hours but the wildflowers are growing, waterfalls running full force and the cute Puffin birds have migrated there and are nesting. With spring and fall, there is a possibility to get a taste of any of those things.

With my crazy show and workshop schedule, we were able to find the time to travel in April. Since April is not considered prime season, so we knew there would be far fewer tourists thus making our chances in finding a last minute hostel possible. During the winter months, many are not yet open. And during the peak months of summer, the rates are much higher and availability harder to come by.  We had also considered renting an RV for the convenience of being able to park and sleep where the Northern Lights may be present to see. But before choosing to rent one, we did learn that it would not be filled with water since there was still the chance of freezing temperatures. For us, without that convenience, it was hard to justify the rates. (once we got to Iceland, we were glad to have chosen the hostel option because Iceland really was quite rural and without running water, we would had to search for bathrooms anyway)

We departed the United States on April 7. Our airplane travel to Iceland was very exciting for me because it was the first time I had flown First Class.  The seats were huge and even reclined into a personal bed. The food was amazing. The staff was more than accommodating. Flying will never be the same again now that I got a taste of the other side. 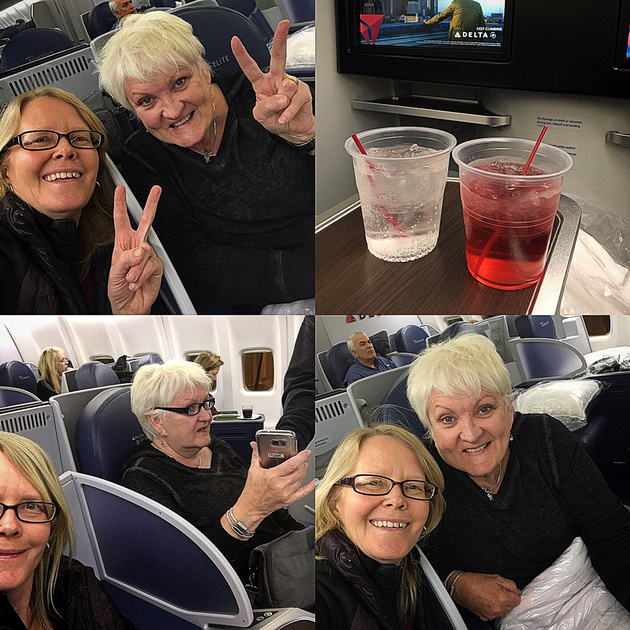 Having fun in First Class! 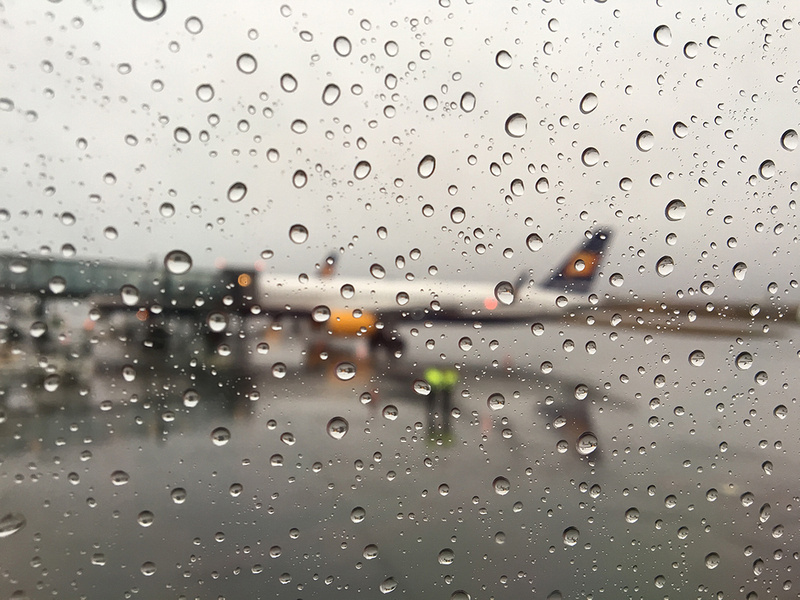 We flew into Iceland in the rain. It rained most of our first day.

We arrived in Iceland during a rainstorm which proved to be a good thing. We had some technical phone issues to take care before heading out into the vast countryside of Iceland. We were finally able to get on the road just after 1pm.   The rain was intermittent which allowed us to get a few photographs in between the rain drops. The low lying clouds were beautiful but we had no idea what the area really looked like. We could not see mountains nor sea. 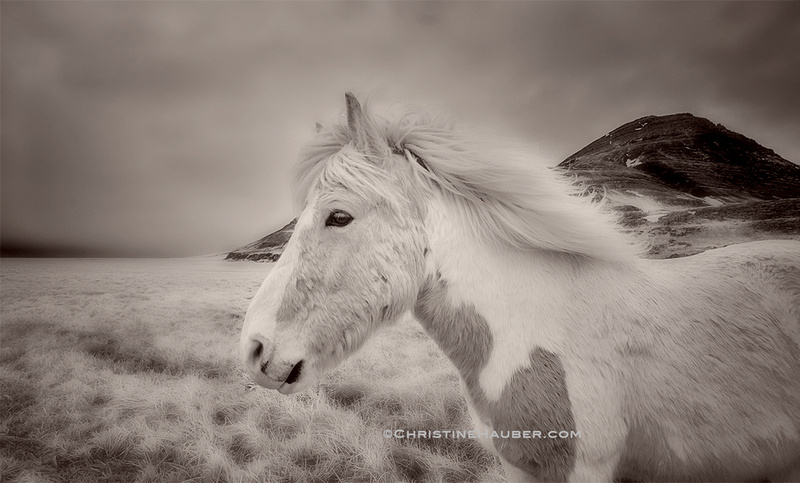 Icelandic HorseIcelandic Horse photographed with digital infrared. This was a very rainy day for us in Iceland but the rain had stopped long enough for us to photograph this beauty and her horse friends.

Finding Icelandic Horses was not hard to do but finding ones that wanted their photo taken proved to be difficult.
The remaining six days of our Iceland journey presented us with an array of different weather conditions. My least favorite being completely blue skies which we happened to have more often than not. Being an infrared black and white photographer, my greatest pleasure in landscape photography is amazing clouds and skies. So, on these cloudless days, I looked for subjects that lent themselves to this kind of light. 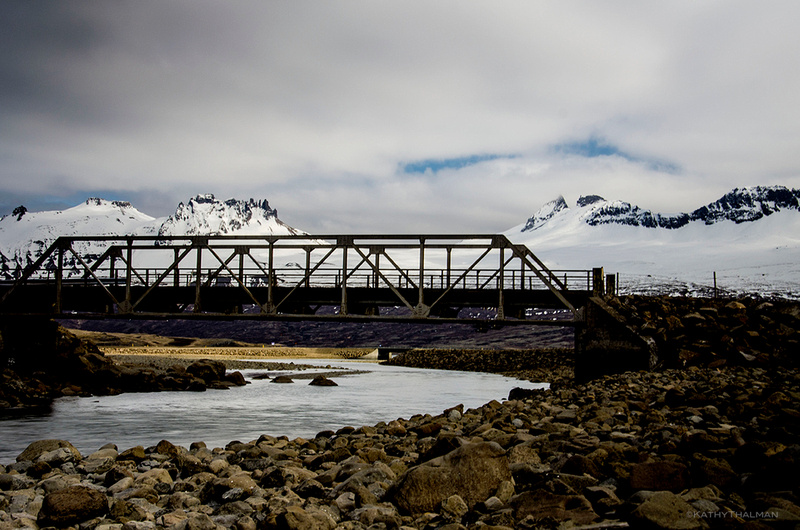 Behind and above us was another waterfall. Kathy turned her attention to these wonderful mountains and bridge.

Iceland is best known for it's waterfalls, ice and ocean. Around almost every turn was a waterfall to photograph. We stopped at many of them and tried to find an angle that not everyone had already photographed. 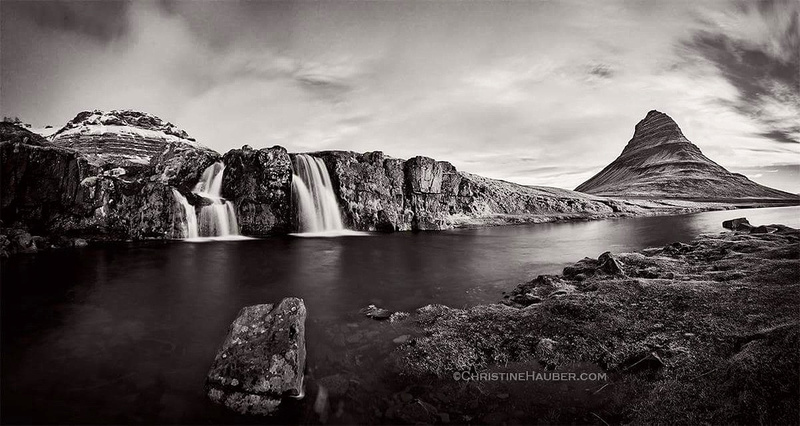 In addition to the waterfalls, there were churches everywhere!  We stopped at at least five of them, each very similar to the next.

Video of one of the many churches in Iceland

We eventually found our way towards the east and away from the southern side of the island where most tourist buses were. There were many quaint fishing villages as well as the island's largest forest. We had seen so few trees along the south that driving into the forest was a shock. 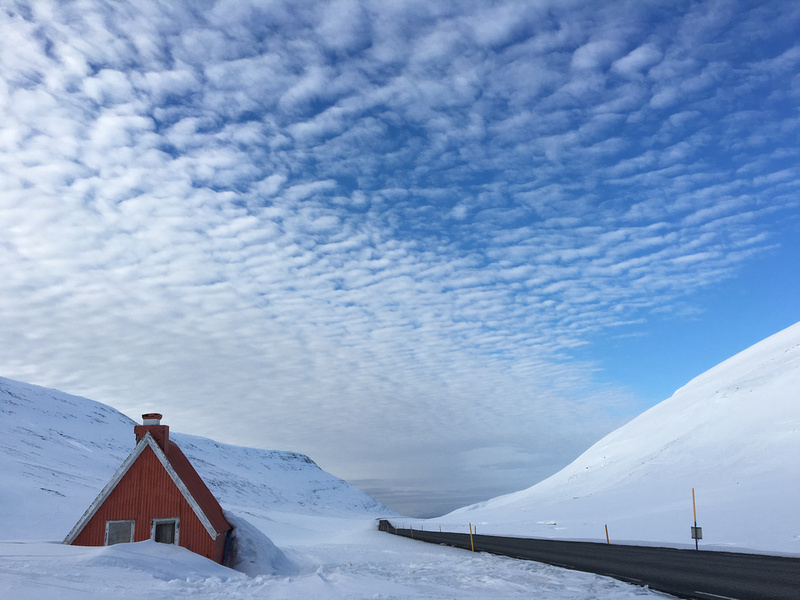 Once away from the crowds, we experienced my favorite aspect of photography....exploration and solitude.  I am feel at one with Mother Nature when I can really hear her sounds and feel her power. I have always felt that the waves of the ocean and the sound it makes is the heartbeat of the earth. So being out and walking the black sand beaches with no one else around is so freeing and exhilarating (my client was doing the same thing but in a different direction). I could have spent hours out near the ocean had it not been so cold. Once my frozen fingers could no longer work, it was time to return to the car for a warmup. 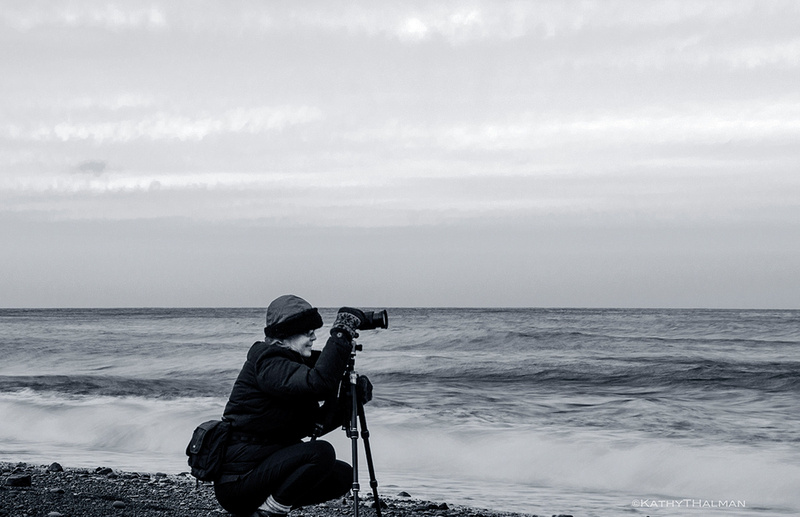 Kathy photographed me as I tried to stay warm in the cold weather. I bought new Icelandic gloves that kept my fingers so much warmer. 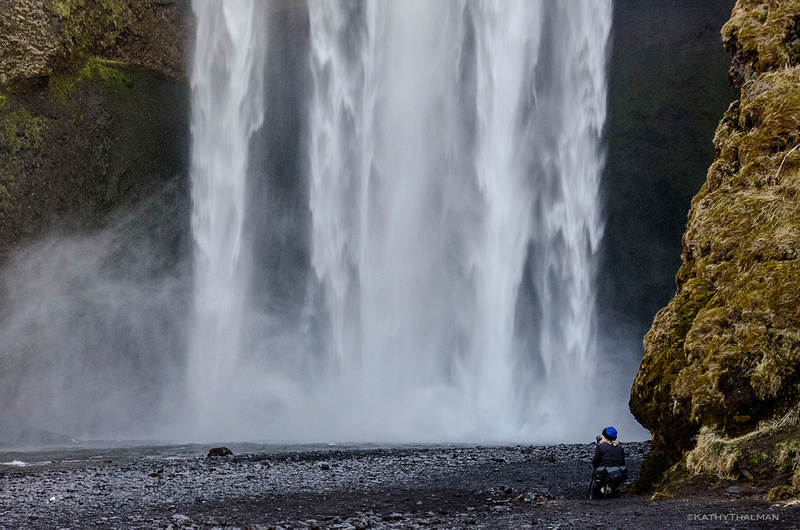 Skogafoss - one of the most impressive waterfalls in Iceland

During that day, I found fun and interesting rocks to look at, some that were photographed but many that were just enjoyed for their uniqueness. We drove through snow covered mountains that were void of trees and it felt otherworldly. By the end of that day, both my client and I exclaimed, "that is the kind of photography I love!" I asked her what she meant and she told me how she could just observe and find unique things to photograph and I responded with, "yes! I was able to get in that zone that allows me to think and feel and capture images." And we didn't have any preconceived ideas about what to photograph based on the thousands of images online.  It really opened our eyes to other possibilities. 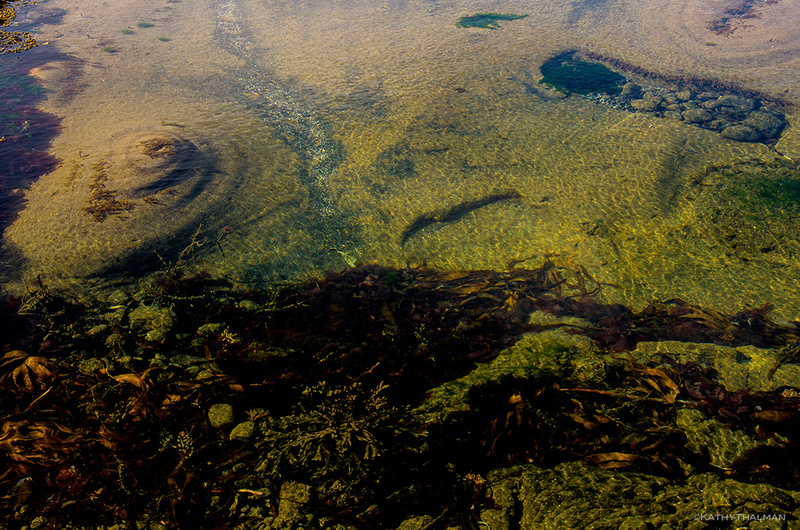 During our trip, we had one good opportunity to photograph the Northern Lights. We were in the right place at the right time but the weather did not cooperate. The wind had really picked up speed throughout the evening and while we were sitting in the car awaiting the show, the wind was hitting speeds upwards of 40 mph. We could barely open the car door. So for a couple hours, we sat in the car hoping the wind would die down and the Northern Lights would show up. We did end up seeing one quick ribbon. Kathy was able exit the car but wasn't even able to hold her camera still let alone put it on the tripod. I was surprised the wind didn't tear the door off the car. We returned to the hostel bummed. 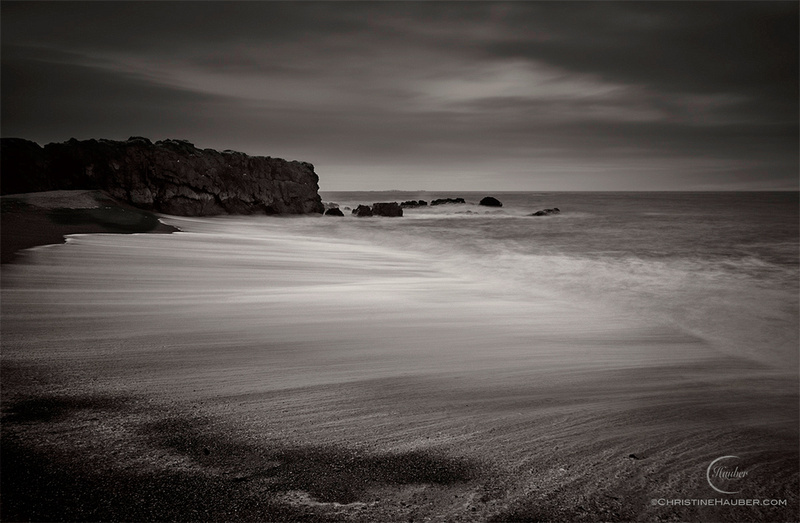 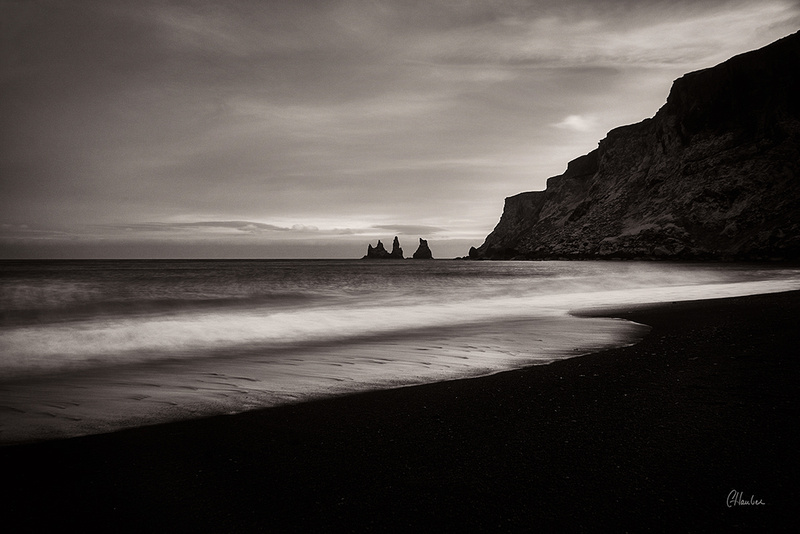 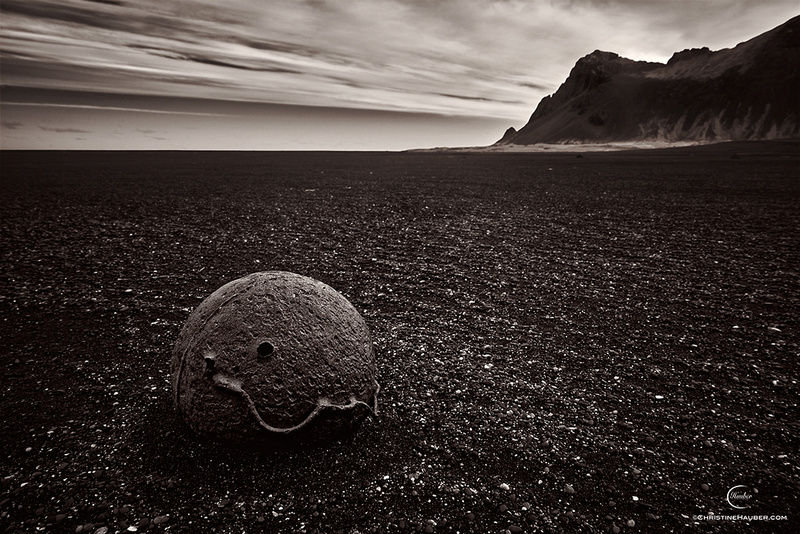 Something OddAn odd object on the black beach of Iceland.

An odd object on the black sand beach of Iceland

We ended our journey tired but happy. Granted, we had hoped to have experienced the Northern Lights but I know of many photographers who have gone to Iceland specifically to photograph the Northern Lights and have returned home with nothing they are proud of. It is a risk worth taking but a disappointment nonetheless. Kathy had hoped to have seen ice caves (these are open during the winter months) and I would have been happy seeing Puffins (they arrive during July). But, regardless, we saw so much. Each of us could go back during these different times of the year given that flights are not too expensive. Plus, I could always apply for an Artist-in-Residence program and stay there for three months creating more photography as well as teaching workshops. 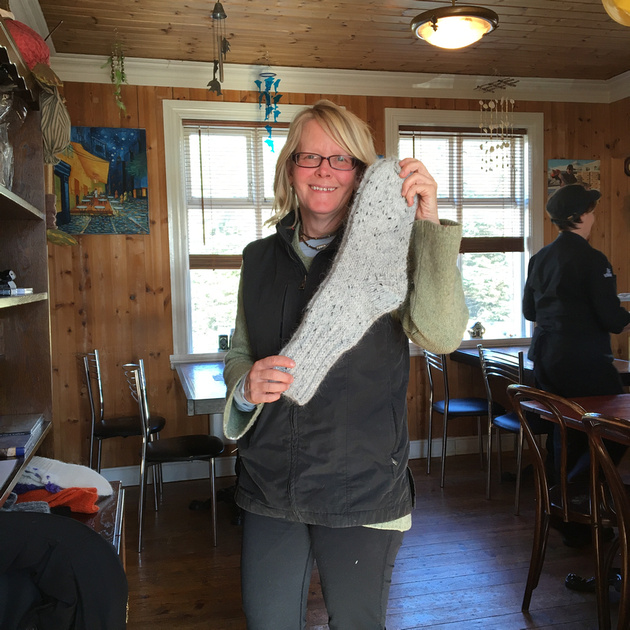 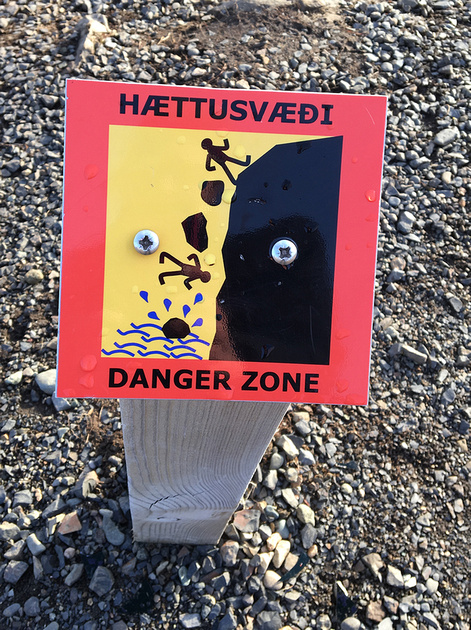 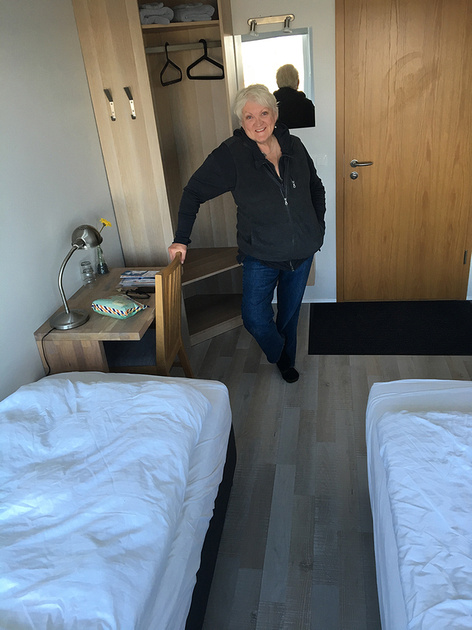 The Hostels through Hostels International were very nice! 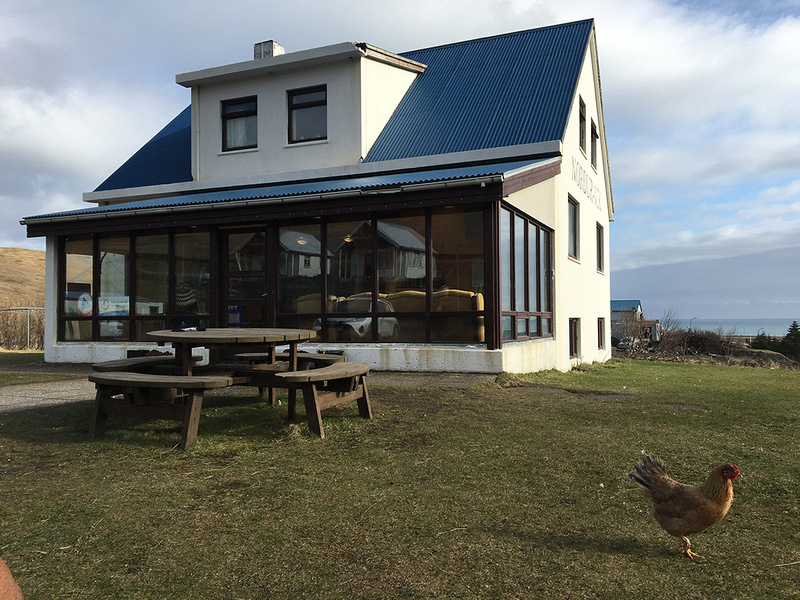 This was one of the busiest hostels. People and chickens. It had a great view overlooking the ocean. 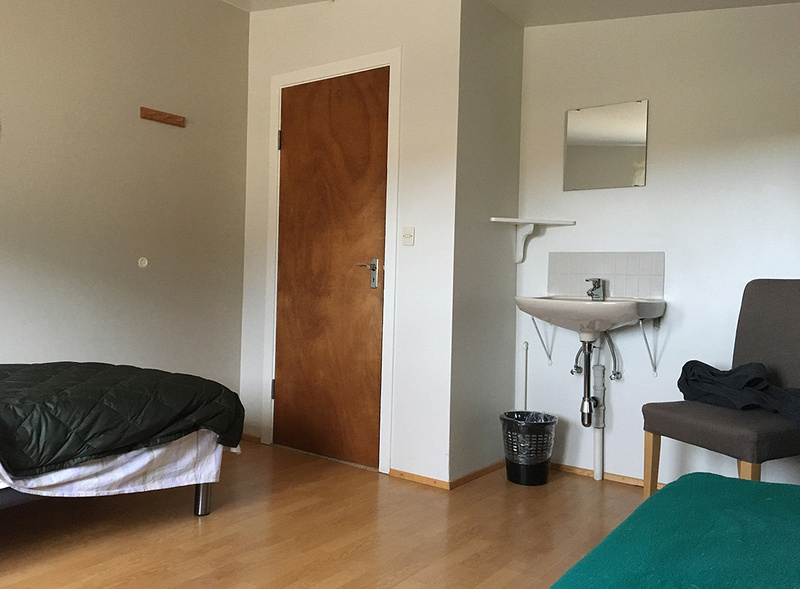 Another hostel. They were clean and quiet. Most had shared bathrooms but we never had an issue with getting into the showers easily.

They also all had kitchen facilities so we often cooked our own food.

Rainbow and WaterfallSkogafoss in Iceland with rainbow

A rainbow over a tourist at one of the many waterfalls. 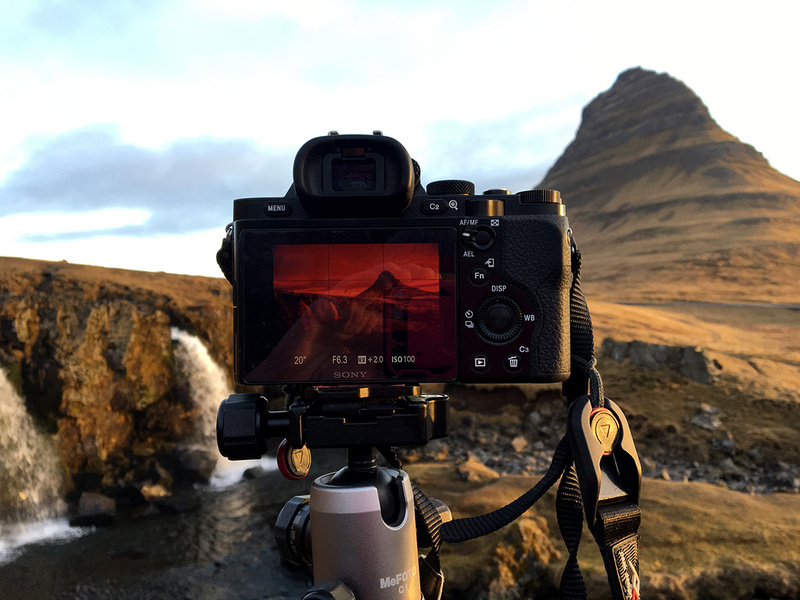 I shoot primarily Infrared. This is a Sony a7r that has been converted. And I love my MeFoto Tripod! 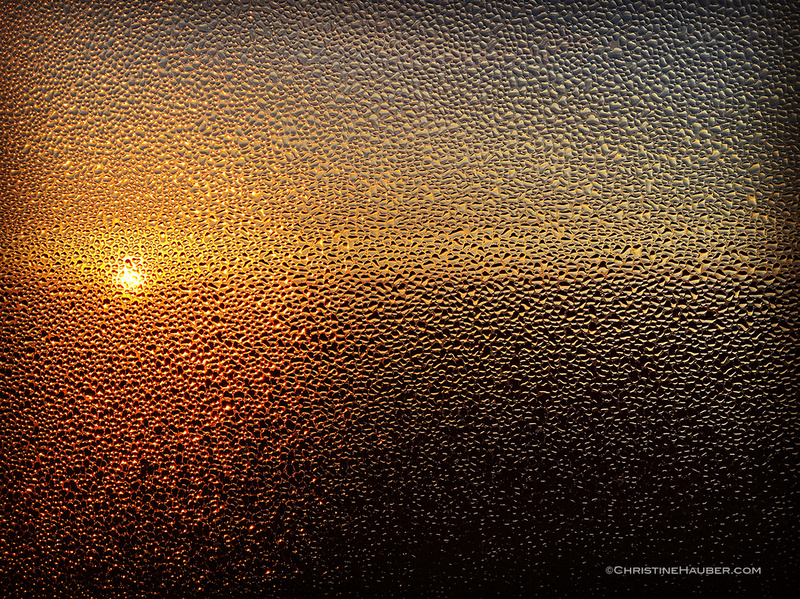 Our final sunrise in Iceland. We spend seven great days in this beautiful Nordic country.

Kathy and I had a great time as you can see from this video.