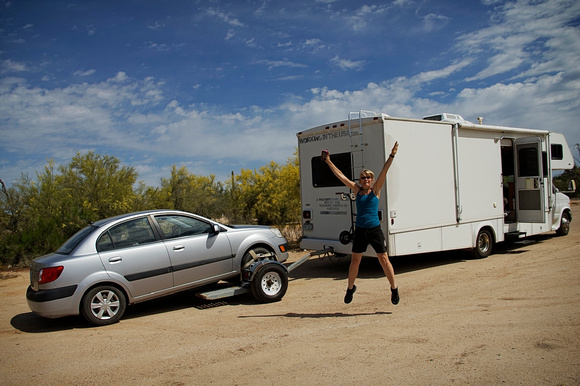 Exciting Adventures Exciting EncountersYou never know what life is going to hand you!

You never know what life is going to hand you!

As I was in the Arizona desert single handedly loading up my car onto my car dolly that I attached to the back of my RV, a truck pulled up beside me. This was not unusual because all winter I was parked next to a horse riding ranch and often people were lost and thus did not know where to find the entrance to the stables. But in this case, as I approached his vehicle, he said, "I saw your RV on Scottsdale Road and was curious as to what it is you are working on so I rushed home and looked up your website."  Now granted, I have the signage on my RV that I have had since 2001 that says, "WorkingInTheUSA.com...A photographic series about the working people of America." Usually about once a year, someone will comment on it but for the most part it is overlooked.  In this case, this man, named Marc, looked up this no longer existing website and of course found nothing. (Yes, I now plan on taking the .com off of the RV signage).  But instead of giving up, he started driving around the area he had last seen me and low and behold, there I was on the ranch!

I proceeded to tell him my story and he became very excited. Apparently, he and his wife are in the launching phase of a new podcast series called, Keep Your Day Dream.  They are interviewing people all over the world who have left a seemingly "normal" life to embark on adventures that were once just a dream.  In my case, I feel like I left normal in 2001 to begin my Working in the USA project and then almost returned to a normal during the past three years when I became creatively stifled and unfulfilled by my photography path.  I have now become reinvigorated and feel like I am once again living my dream and following a path I was meant to take.  Maybe I had to go through a down time to realize where my passion really lies.

So as soon as my interview is available, I will let you know here on my blog.