The Making of “Facing the Sun”

“Facing the Sun” is a multiple layered photograph beginning with a black and white image of a sunflower photographed on an overcast day. 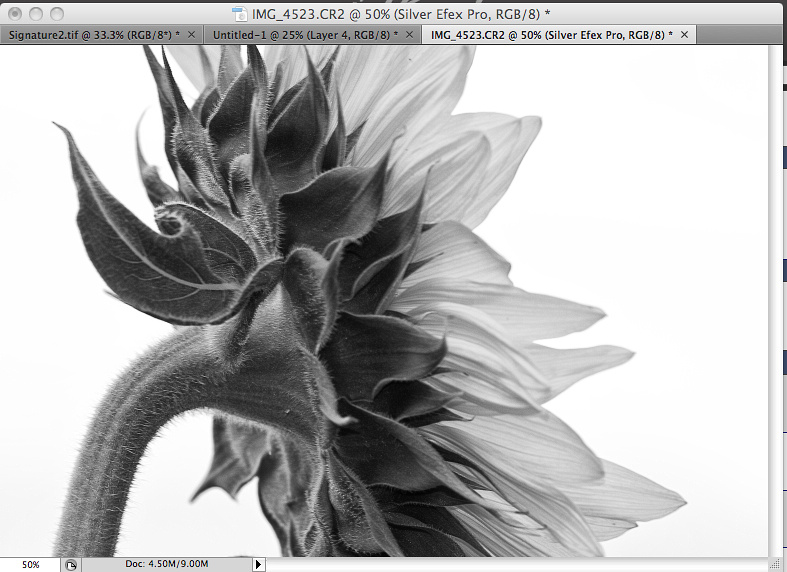 Although, I love black and white, I am intrigued with layering images and adding textures. My vision for this was to recreate with textures a colored version of this image.

First, I found a texture layer from Flypaper Textures that I felt would create a nice soft, unobtrusive texture layer on the stem of the sunflower. With the texture in its own layer, I changed it to an opacity of 65% and chose Overlay. At this point, the texture filled the full screen so it was necessary for me to “erase” this layer from just the petals of the flower. Since this layer was in Overlay, it did not affect the background white. 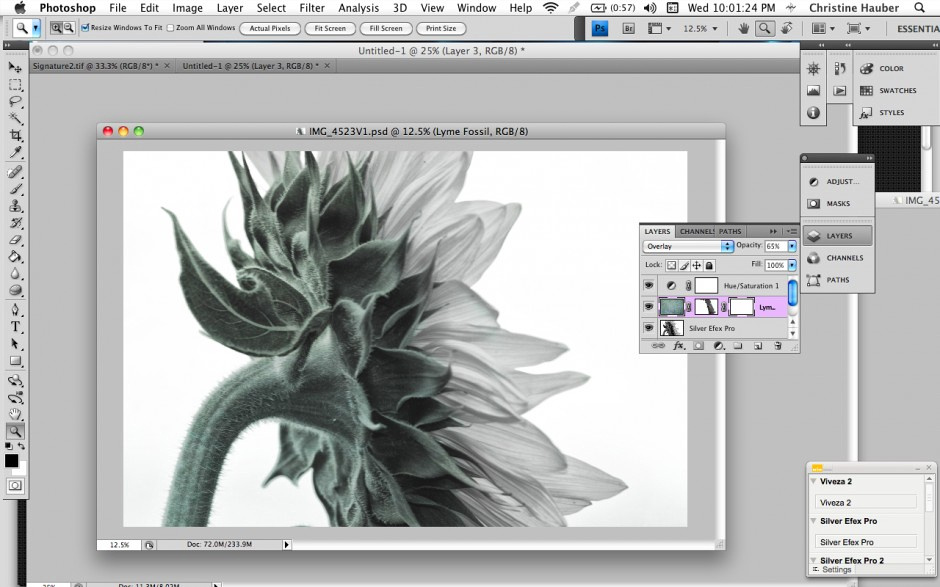 Next, I found a texture that I could use for the petals. With this layer, I chose Overlay and set the opacity 95%. On this layer, I adjusted the color balance and the hue/saturation until I was happy with the yellow tones that resulted. I did just a bit of “erasing” of the yellow from the stem. Again, the background white was not affected. 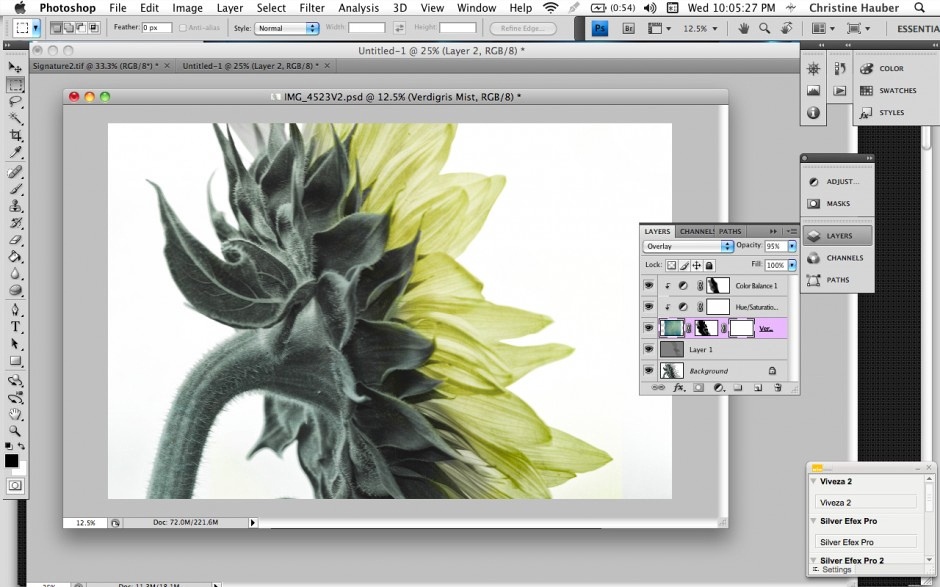 My final layer was added just for the background. Again, I chose a texture from Flypaper Textures. I adjusted the original texture’s color balance until I reached a bluish tone I was was happy with and then imported it into the sunflower shot at an opacity of 37% set to Multiply. This layer affected the whole image so with a layer mask, I masked out the flower and just applied the texture layer to the background.

In this following example, I am showing you the first two layers I adjusted. I was almost happy with this version but felt that the whole scene, especially the flower needed a softer feel to it. 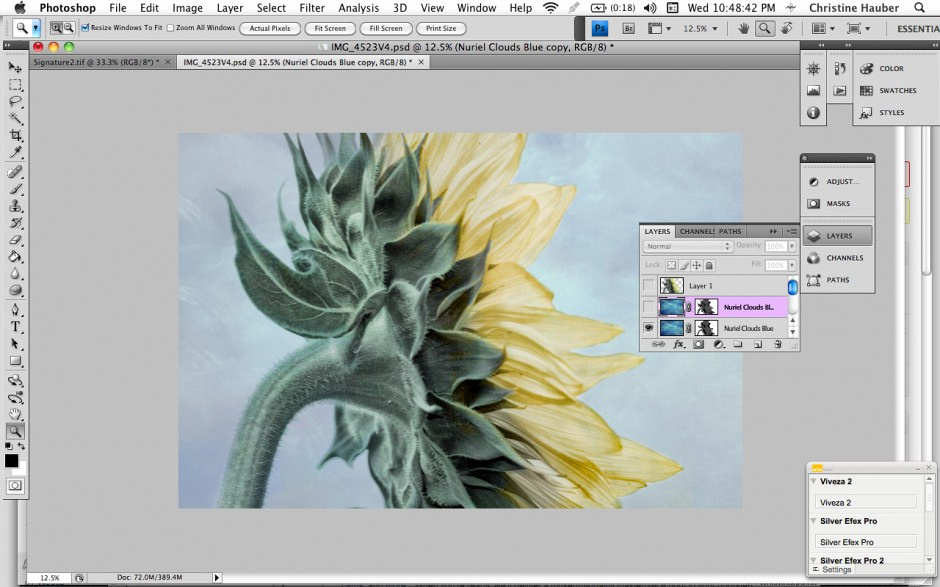 In order to create the softness I wanted without losing detail, I created a duplicate layer of the flower and added a 50% gaussian blur filter to it. I set this layer at Normal with an opacity of 37%. I also felt that I had lost a bit of the depth of the blue of the background and regardless of my adjusting the opacity, it was not affecting the background like I wanted it to, so I duplicated the texture layer and set it on Overlay with an opacity of 44%.

The final resulting image is soft and painterly. 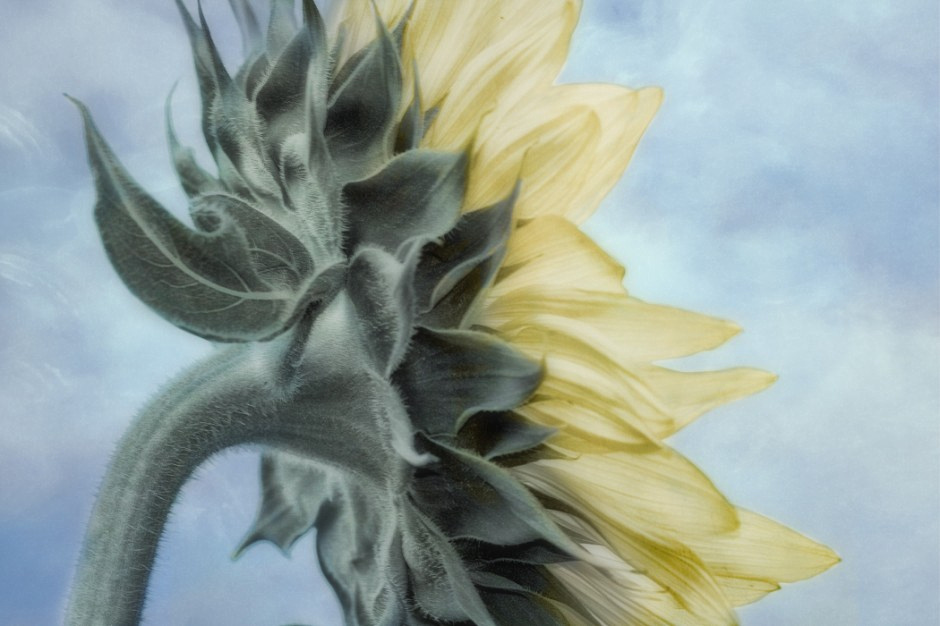