In 2001, I embarked on the journey of a lifetime. I was to be spending my time traveling throughout America photographing the people and the work they do for a book titled, “Working in the USA”. I figured that since I would be traveling to all corners of the US, I could also experiment with other types of film. After years of shooting color and black and white, I wanted a new challenge. I also wanted a film that stood apart from others and thus decided to devote my attention to infrared black and white film, specifically Kodak High-Speed Infrared Film (HIE).

I purchased a Winnebago motor home, equipped it with a darkroom and filled my onboard refrigerator with film. My darkroom consists of a Bessler 45MX enlarger, a Jobo processing kit and a wide array of different film developers. At the time, I had a handful of different filters to use with the infrared film including a yellow, orange, medium red and a very dark red. 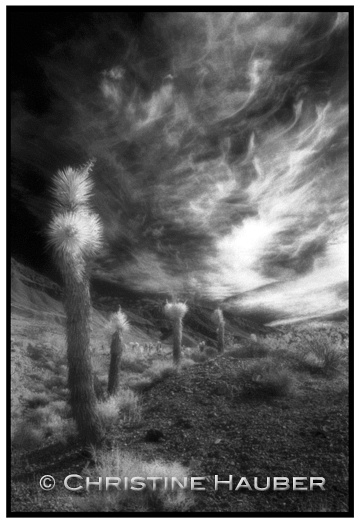 I drove away from my home town of Denver, Colorado in April of 2001, heading east, following a map that would eventually take me into all of the lower forty-eight states. Being that the first state I was to travel through was Kansas, I focused my attention on barns. With the motor home, I was able to park where I needed to, wait for the perfect light or clouds, load and unload film as I waited and then process the film to make sure I was happy with what resulted before I traveled on down the road.

Through such stops, I was able to try all the filters, try the different developers and decide the direction I wanted to take my artist endeavors. I felt the yellow and orange filters did not produce the dramatic effects I wanted. I had always loved rich blacks and wanted my blue skies to be as dark as possible and thus decided that the dark red filter was the perfect fit for what I desired. With this filter came its setbacks. My aperture normally set at F22 resulted in exposures that required me to use a tripod at all times.

Through trials and tribulations, I decided that the developer that I like the best which resulted in minimal grain, helps retain details in the highlights and shadows without high contrast is TMAX developer. I process the film at 75˚ for 4 minutes. This results in negatives I can print to 16×20 with very little loss of image detail.

It took me about four months to get a feel for how the film really worked, what images were the best to photograph and what kind of light had what kind of affect on the subject matter. Simplicity became my focus.

I also stopped worrying about shadows and started focusing on the clouds. A simple subject such as a barn results in a plain image if shot on a cloudless day. With the right clouds, an amazing image in produced. I soon began to understand the results well enough to be able to start seeing “in infrared”. I can look at a subject or scene and know what the outcome will be. For me, it is the search of the perfect image that makes photography so much fun.

Once I perfected the exposure and development, I started trying different cameras. I have been happiest with the fully manual, no longer in production Widelux panoramic camera. I am still able to use the same 35mm HIE film but because it only has three exposure settings of 1/250, 1/125 and 1/15, I am required to shoot at f8. This rarely poses a problem, except in the verticals, where the foreground is quite close to the camera and thus can produce slightly soft edges. But to me, this is part of the art of what I do.


My travels for “Working in the USA” lasted for four years and over 60,000 miles. During that time, I shot more then 1,000 rolls of HIE film. SInce then, I continue to travel to art festivals and to other amazing American landscape destinations. My photography of the American landscape includes most of the National Parks as well as the manmade landscapes of the small towns, the fishing communities and the barns and lighthouses that dot America’s vastness.

Granted, infrared film is more grainy then regular film, but I relish these differences. It has its own look and should not be compared to digital infrared. Nor should it be critiqued it as regular black and white. It is the grain and glow of infrared film that attracts art galleries and buyers to my images. It is the infrared qualities of my images that give them their ethereal beauty.

I still print my silver gelatin photographs in a traditional darkroom on fiber based paper. I selenium tone each for additional permanence. Occasionally, I split tone my photographs to produce a brownish toned photograph.

And as an ending note, Kodak has discontinued this film and my last remaining roll of Kodak’s HIE film was just run through my camera. I will start testing Efke’s Infrared film as well as attempting to shoot digital infrared to see if I am happy with those results.

Christine Hauber is a fine art photographer based out of Denver, Colorado. Her book, “Working in the USA” is was published in 2005. It can be found at http://www.christinehauber.com or through Amazon.com. Future books on the National Parks and Lighthouses are in pre-publishing production.