To my dismay, my favorite infrared film was becoming a rarity.

Kodak had decided to discontinue production nearly two years ago of its high speed infrared film. My supply in my refrigerator was running low so I had some decisions to make in regards to the direction I wanted to go creatively. I love the look of my resulting images from Kodak, but I could not cry over spilled milk. I had to continue on and continue growing by researching other options for my shooting style.

So with testing, I had to decide the best filter for the results I wanted. The use of the filter will only let the longer wavelengths expose the film, getting thus an image that has been obtained from the infrared spectrum. Just shooting this film with no filter would result in images similar to regular black and white film. So in order to get the dark skies I love so much in my photography, I would need a deep red filter. The dark red filter I had been using for my Kodak film was too dark for the 820nm of Efke. So, I purchased the Hoya R72, a nearly black red filter, which will cut off most of all visible light.

The following image was taken with the Efke ir820 on an overcast day. Because the blue sky is not showing, you will not see the effects of the dark red filter on the sky. 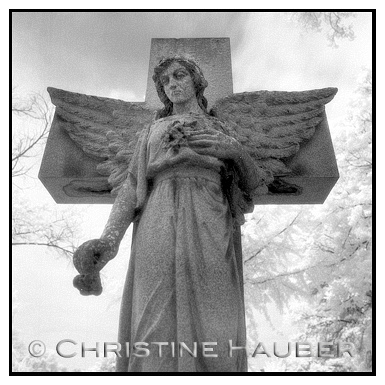 Through trial and tribulations, I found that a good starting point was an ISO of 3 which put all my exposures at lengths longer then 1 second each at an aperture of no wider then 16. I continue to bracket my exposures so that I have more then one choice of exposures to work with and I continue to use my tripod in all of my shoots.

As with Kodak’s film, I still need to load and unload in complete darkness. A changing bag has become very handy when out in the field. When processing the film, I decided to start with the developer and times I used with my Kodak film. (see my blog on Infrared film) Luckily, these times resulted in acceptable image quality and wonderful tonal values with the Efke as well..

The problems I ran into had little to do with Efke’s film although I did hear about issues of it easily scratching, little black dots after development and static electricity during loading for processing. My issues had more to do with my own equipment. I love using my Widelux swing panoramic camera but because of its age, I can only shoot it at 1/125 of a second. With my filter of choice and having to set Efke ir820 at an ISO of 3, I could barely get away with shooting wide open. This resulting images were underexposed and sometimes not sharp enough in the foregrounds. So, instead I decided to start shooting using my Bronica medium format camera.

In the following image, I tested the depth of field and focusing of the film with the camera and realize with this setup, I will need to shoot at an aperture of no less then F22. 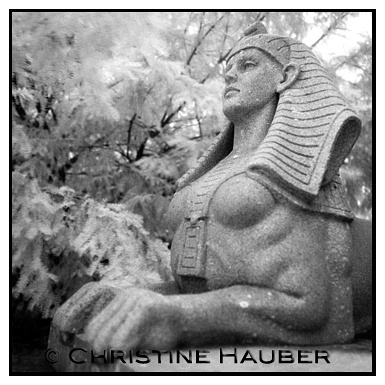 I have enjoyed shooting this film and have accepted that it is not Kodak’s HIE. I have learned to work with what my new results are. But, at about the time I really started to understand Efke’s qualities, a friend to let me use his digital camera that had been converted to infrared. You can read about my digital experience in my future blog.